The cathedral is among the youngest sacral buildings in the town. It was built to symbolically highlight some of the traditional Byzantine elements, while from the outside it looks modern. Noteworthy is the sacral interior decoration.

A typical feature of byzantine architecture is the separation of the nave and the sanctuary by the figurative wall called iconostasis. A three-stage iconostasis is made up of 3 rows of beautiful icons, written by Ukrainian masters from Lviv using a traditional technique according to transcribed canons.

The only church in Slovakia with a modern impressive mosaic

The church is also the only church in Slovakia, the sacred decorations of which consist of a modern impressive mosaic according to the school of Father Mark Rupnik from Centro Aletti in Rome. His work can be admired in Lourdes, Fatima or the Vatican city. The mosaic from natural materials - various types of stone from the Spiš region and the entire world, extends to an area of about 400 m2.

Thanks to this dynamic mosaic you will recognize in an unconventional but interesting way the main scenes and parables of Christian belief, from God’s creation of the first man Adam and the first woman Eve, up to the “Anastasis” - the descent of Jesus Christ where he symbolically holds the hands of Adam and Eve and invites them to heavenly glory. 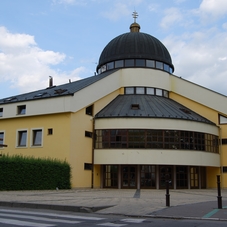 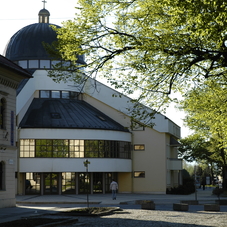 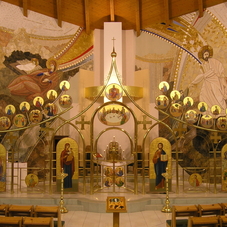 The Greek-Catholic Church - Parish of the Transfiguration of the Lord