During the concert leading Slovak soloists - soprano Andrea Vizvári and tenor Otokar Klein were presented under the baton of conductor SF Leoš Svárovský in the Evangelical church.

The festival usually takes place in October in the Evangelical church. 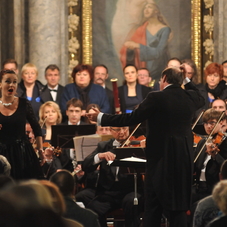